Time for another First Impressions entry…keep in mind that these entries are just my first impressions of a piece of gear based on one or two uses.  They’re NOT full blown reviews based on extensive use over time.

OK, yeah, I got a new piece of gear and had to play with it and show it off…kind of like the kid with a new toy on the playground but my playground is a blog.

I’ve been wanting a hammock stand of some sort for a while now.  We do a fair amount of camping in established campgrounds and it’s not unusual for the managing entity to not allow “camping units” off of the designated camping area.  If you can find a pair of trees that happen to straddle the designated camping area and are more or less the right distance apart you’re in great shape.  If not, you might be out of luck.  Now, with me setting out on The Great Georgia Earthcache Quest, it looks like I’ll be doing a good bit of solo campground camping over the next few years;  a hammock stand seemed to be the logical solution to the problem.

There are plenty of hammock stand options out there, both store-bought and do-it-yourself.   The store-bought options are usually geared toward the ‘Pawley’s Island’ style hammocks and don’t generally break down small to travel and often don’t work too well with most camping hammocks (gathered-end or bridge hammocks).  Most of the DIY options seem to involve long poles and while they might transport well in the back of a pickup truck or on a roof rack, they typically don’t travel as well by other means.

I’d been watching a thread on the Hammock Forums bulletin board about a different type of hammock stand called a tensahedron stand that essentially is a tetrahedron.  Basically, a tetrahedron is a polyhedron composed of four triangular faces, six straight edges, and four vertex corners.  OK, I know, that’s a geometric mouthful, right?  Stick with me.

Somewhere along the way I saw someone mention the Tensa4 hammock stand.  As it turns out, a couple of Hammock Forums members came up with a way of making and marketing a tensahedron stand that breaks down small for easy transport and have formed a small cottage business, Tensa Outdoor, to do just that.  I checked out their website, watched their videos, and was pretty intrigued.  Not too long after, Sean “Shug” Emery, another Hammock Forums member uploaded a video to YouTube in which he demonstrated the Tensa 4 stand.  Now I’m even more intrigued but, at $300, it was a little more coin than I wanted to drop ‘just because’.

A month or so ago, with our 30th wedding anniversary coming up, ConnieLou asked me what I would like for an anniversary present.  I had to think on it a bit and ran through a few possibilities before the obvious answer came to me…why not ask for a Tensa4 stand?!

Just before we left town for a short anniversary trip to Niagara Falls, a box from Tensa Outdoors appeared on our front porch.  ConnieLou let me open it early to see what was inside but unfortunately I really didn’t have a chance to take it out back, set it up and try it out for a few days.  Yesterday, after cutting the grass and running a few errands, I finally had my chance.

The Tensa4 stand came packed in a heavy duty carry bag along with the cordage for the ridgeline, the baseline, one guyline and the head tether and two Orange Screw anchors. 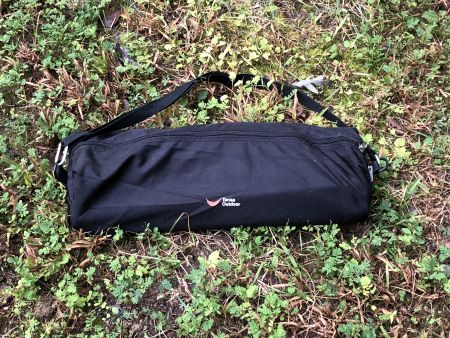 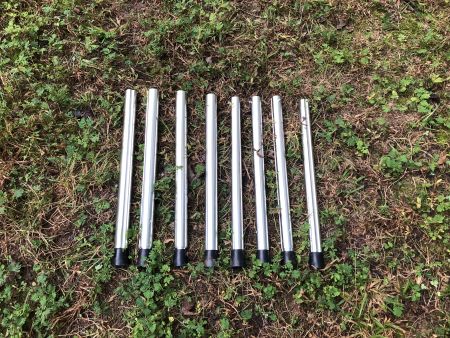 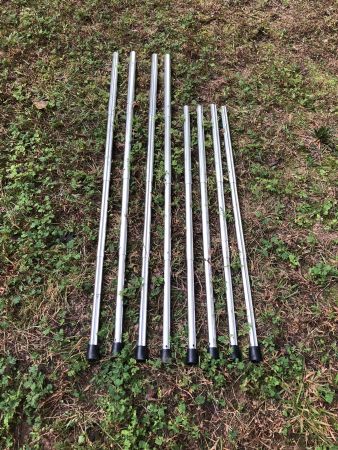 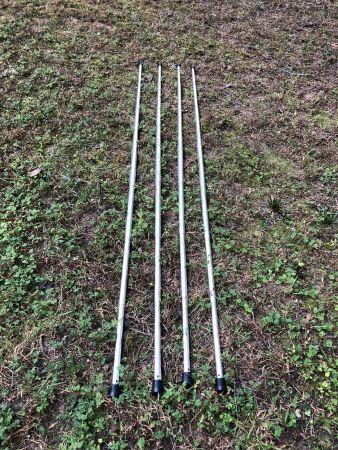 The poles are then connected in the tetrahedral configuration with the baseline and ridgeline and anchored with the guyline and head tether. 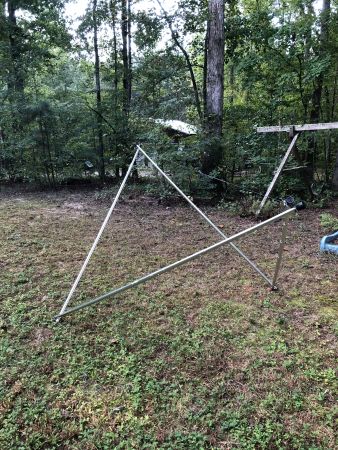 With everything connected and anchored, the hammock is attached to the upper apexes.  I was lucky and after a bit of adjusting I was able to slip the ends of the continuous loops at the ends of my hammock directly to the ends of the stand without needing additional cordage or straps. 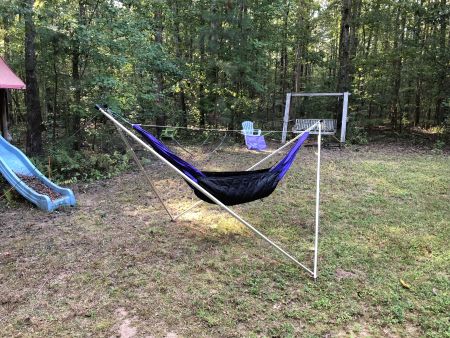 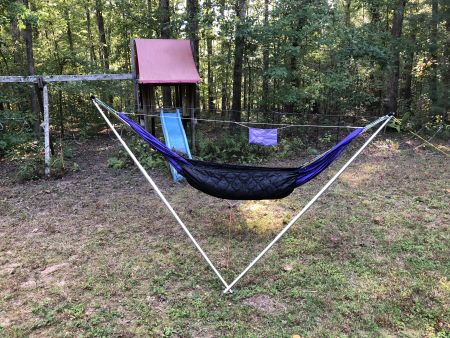 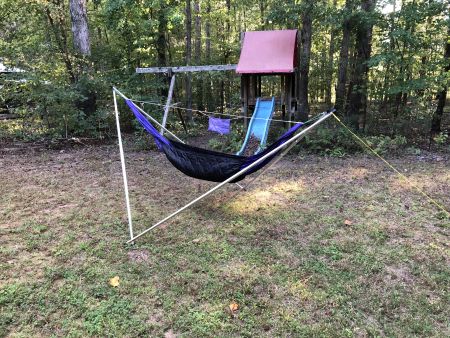 Since there was no rain in the forecast, I decided to forego adding a tarp this time around in order to give myself a chance to begin to get used to the stand without anything extra to deal with.  In the same train of thought, I opted to set it up with my simple DIY tablecloth hammock rather than my Chameleon with its integrated bug net.

While a little play was expected, I was pleasantly surprised at how sturdy the stand felt without a load on it and when I climbed in it felt rock solid. Once I got into my sweet spot, neither feet nor my shoulders bumped into the stand.  Getting out is slightly more tricky than normal because you have to get out and put your feet on the ground on the side of the baseline closest to the head end of the hammock to avoid ‘mousetrapping’.  I came back out later in the evening to give it a good overnight test and, again, was quite pleased. 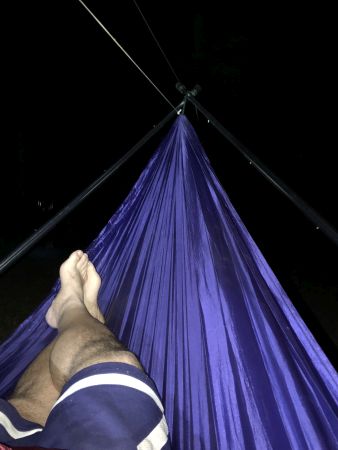 All in all I think I’m going to get along well with the Tensa4 and really can’t think of anything I would change or modify.  My only concern is that my tarp with its 12-foot ridgeline might be a little too long.  We’ll find out about that soon enough.  In the event it is too long, maybe Santa might bring me an 11-foot tarp.  Hey Santa, just I case you’re listening, a Wilderness Logics 11-foot Big Daddy and a couple of Dutchware Stingers would be just the ticket.  Hint, hint…

That’s it folks.  As always, your mileage may vary.

Disclaimer:  We have no affiliation with Tensa Outdoors.  The Tensa4 stand was purchased by us and we’ve received no compensation, monetarily or otherwise, for this post.

Adventures in grilling,barbecue and beer

Hikes and Travels in Colorado and Beyond

The Blog of Travel

Motorbikes, dogs and a lot of traveling.

"Those who teach the most about humanity, aren't always humans." -Donald L. Hicks

The Life of a Geocacher

"Adventure is Out There"

Our journey from getting off the couch and onto the trail

Sometimes the best way to figure out who you are is to get to a place where you don't have to be anything else.

The podcast about geocaching

Texas beer and where they are

Patrons of the Pit